Could different quantity of gluten and minerals be a part of gluten-related intolerances? Food that we eat daily, communicates – through micronutritional content – with our genes. This aliments-genes interaction contributes to the health maintenance or onset of no age-related neurodegenerative diseases. This interaction is studied by nutrigenomics; it is the study of the effects of food constituents on gene expression (it includes changes that maternal nutrition causes to the fetus metabolism) and nutrigenetics, that studies how genetic differences, “polymorphisms” or “SNPs”, are the reason of various answers to the food micronutrient ingestion. The exploitation of these latest news can contribute to the food innovation and to the custom diet in relation to its DNA.

For thousands of generations we have evolved with food shortage: genes and molecules that control metabolism have been formed during this period 1. Our DNA has been programmed to store fat for famine periods, when getting food to eat was a hard feat 2 2. The great industrial revolution has caused a radical environmental change in a few decades, disadvantaging the millenial adaptation equilibrium 3. For example there are theories that specific proteins called “lectins” are the expression of this equilibrium among the environment, genes and the immune system interaction 4. However, lectins of digestive system are not in the same chemical composition for everybody; it appears to be an important statistic linkage between A or B antigens, that are present on the membrane of formed blood elements, specially on red blood cells. From this theory some proposals, scientifically unsuitable, correlate the nutrition to blood group 5.

THE ANCIENT AND MODERN WHEATS 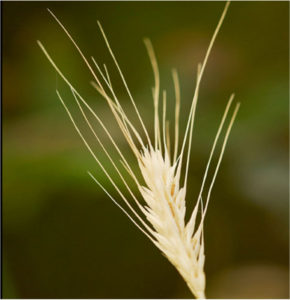 The Creso contains a higher gluten quantity and a lower quantity of some minerals compared to ancient wheats. These features made it most suitable for bread making and confectioneries but for some authors the same features could be a part of diffusion gluten-related multiforms intolerances. It emphasizes the necessity to demonstrate that the gliadin aminoacid composition contained in the Creso involves a different immunological response compared to original wheat gliadin, releasing immunological different fragments. Once the theory is demonstrated, the reduced consumption of this wheat should be suggested, before all future generations can become more susceptible to gluten intolerance.

Several observational studies link gluten and casein rich diet with intolerance. This relation is well-rendered in individuals that follow a low-gluten/-casein diet because they have high life quality. Gluten, cow’s milk and enterovirus infections are three environmental factors considered a contributory cause of diabetes mellitus first-type development. Other epidemiologists emphasize how individuals with potential celiac disease, good consumers of gluten, have a more elevated risk of developing diabetes compared to population control (up to 25% after 30 years of gluten-containing diet). It seems that in individuals with celiac disease genetic predisposition (DQ2/DQ8), gluten is able to promote an immunological responce against the pancreas and promote the diabetes’ onset. This risk disappears in celiac individuals early diagnosed (then put on diet), showing that a gluten-free diet is able to prevent diabetes. This suggests that the antibodies against pancreas, in celiac individuals, tend to normalize and eventually disappear due to dietary treatment.

The insulin response can vary according to the starchy food different composition. It’s necessary to analyze the starch structure: starch granule is formed by two types of molecular components: the amylose and the amylopectin, that are associated with fats, proteins, fibers, micronutrients (vitamins, minerals, etc.). The amylose/amylopectin ratio defines a different behavior about the insulin secretion release. The ratio can vary greatly from one botanical family to another, and even from one variety to another within the same family.

The starch structure is modified if subjected to water excessive heating. The starch granules hydrating progressively, swell and a amylopectin fraction passes into solution; if the heating continues, even an amylose fraction passes into solution. The final result is a more or less viscous suspension: it is the phenomenon of starch gelling. It should be known that the less is the amylose proportion, the more is the gelling and vice versa. It was demonstrated that more starch gels (because of its low amylose) it is easily hydrolyzed by alpha-amylase (starch digestive enzymes) the greater is its propensity to become more glucose and the glucose is tended to increase. In other words, if a starch contains a small amylose percentage, its GI (glycemic index) will be higher; otherwise, with a greater amylose presence, the gelling as well as the transformation into glucose and GI, will be lower. One can thus easily understand why potato, which has a very low amylose, instead, has a high GI. Lentils, instead, with a higher amylose proportion, have a very low GI. The pasta-making reduces the GI.

The role of wheat in development and cancer prevention is controversial. For some, it promotes the development of inflammatory reactions and cancer; for others it prevents the effects of these diseases and may also be used in the therapeutic treatment. Certainly, a lot of healthy food has derived from wheat germ. A scientific study of 2009 published on Nutrition and Cancer has demonstrated special properties of Avemar, wheat germ extract, for cancer patients 8. It shows potent anticancer activity on cell lines by interfering with glucose metabolism and changing expressions of several kinases. In in vivo experimental models, Avemar is also effective by enhancing the activity of the immune system and leads to apoptosis of tumor cells. The wide range of biological activity of Avemar probably cannot be explained by only one active ingredient. Since there are numerous experimental data and the clinical benefit repeatedly confirmed Avemar can be one of the most potent and best researched food supplements available for cancer patients.

Another study on Evidence-Based Complementary and Alternative Medicine, underlines how fermented wheat germ extract induced cell death and enhanced cytotoxicity of cisplatin and 5-fluorouracil (5-Fu) 9 in cell lines of Hepatocellular carcinoma (HCC), one of the most common causes of cancer-related death worldwide. Curative treatments are not available for most HCC patients owing to the difficulties of early diagnosis. Palliative treatments such as chemotherapy are often associated with low response rate, strong adverse effects and limited clinical benefits for patients. An alternative approaches is the use of fermented wheat germ extract (FWGE) with anti-tumor efficacy that may provide improvements in the clinical outcome of current therapy for HCC. Moreover, the FWGE treatment further enhanced the cytotoxicity of cisplatin in all tested HCC cells, and cytotoxicity of 5-Fu in a synergistic manner in HepJ5 cell lines. Taken togheter, the results identified the anti-tumor efficacy of FWGE in HCC cells and suggested that FWGE can be used as a supplement to improve the tumor suppression efficiency of cisplatin and 5-Fu in HCC cells.

These are important evidences, but other studies are still needed.

The nutritional carbohydrate variation deserves attention. There isn’t only one type of starch. There are different starch types because of their origin, molecular structure (amilase/amylopectin ratio), content and nutrients nature their associated (proteins/fibers). Chemical/phyisical starch properties are constantly evolving under the influence of water, the temperature changes and time. Each hydrothermal treatment, both industrial and culinary, cause a food transformation which gives it specific properties and digestibility. Consequently a specific intestinal absorption follows that leads to a relative glycemic and insulin response. The aliment GI is the result of numerous parameters which must be taken into a consideration in our nutritional choices. The “traditional diet” leaving out the interest for these specific notions, has allowed the food industry to develop not only suspicious botanical varieties but also processing, cooking and storage industrial techniques that contribute to increase an alarming postprandial blood sugar levels in those who eats modern food. Today we know that hyperinsulinism, which is the final result of these perverse metabolic effects, is the origin of obesity, diabetes and many cardiovascular diseases prevalence. However it must be emphasized that a good nutritional status is important for many diseases and cancer prevention 10.