In recent years, within the extensive research regarding human microbiota and chronic diseases, new medical and laboratory technologies have played a crucial role in understanding more complex biological pathways between human cells and microbes. On the other hand, molecular and cellular diversity and their involvement in health responses to changing host conditions have only recently been understood, through the development of brand-new laboratory tools based on ‘omics approaches. The continuous insertion of already conceptualized, new experimental large datasets and raw data onto bibliographic platforms means that they are now accessible for subsequent elaboration by other researchers. This aspect has allowed the creation of an interactive mesh of proteins, genes, and small molecules, usually called, interactome or interactomics.

The Microbiota associated with the human oral cavity represent a collective-interactive group of microbial species, mainly composed of bacteria (Firmicutes, Bacillus, Proteobacteria, and Actinomycetes) but also with some protozoa, fungi, and viral species, and is one of the most complex microbial communities in the human body1,2. These microorganisms are closely associated and disposed of as biofilm in different distinct habitats of the oral cavity, such as the tongue, teeth, mucosal surfaces, so that about 6-7 different microbiotas are present in the mouth, with the tongue dorsum showing the main extensive microbial community in the oral cavity. The types of bacteria found in oral microbiota do not change significantly; in fact, healthy people from different countries with different alimentary habits have similar compositions of oral microbiota, in this condition microorganisms coexisting in normal human tissues and provide proper functional activity in the host. This process activates the control of different fundamental processes such as immunity signal transduction, gene expression patterns and metabolism. The imbalance of oral microflora, normally called dysbiosis, has been strictly correlated with the genesis of different chronic diseases such as cancer3. For example, the anaerobic oral bacteria Fusobacterium nucleatum, which regularly lives on the tongue dorsum, normally conducts a commensal-type cell life, activating various useful biological processes such as: oral-nasal innate immunity, food flavour, and others4. In these conditions, the oral interactome network is able to modulate and maintain the commensal status of F. nucleatum. The dramatic change in microbiota bacterial composition due to a dysbiosis process is related to a significative change in the interactome network and can turn the bacterium behaviour from commensal to pathogenic5. In this case the tissue target cells are continuously stimulated through their receptors by microbiota compounds or by single bacterial proteins and injured by small molecules released in the interactome signal pathway. In the same way, target oral cells produce other related molecule-signals such as those involved in response to intensive oxidative stress (Figure 1).

“Cancer-related bacteria” have traditionally been studied by considering their singular biochemical aspects involved in the neoplastic process function/activation or in maintaining tissue homeostasis, but this aspect lacks completeness and provides a highly limited view of the phenomenon. For example, F. nucleatum has been intensively studied in relationship to colon-rectal cancer or in some forms of oral neoplasia6. These studies often consider the bacterium as the singular biological effector in carcinogenesis, but the same approach could be observed in the literature for Porphyromonas gingivalis and with microbial genera such as: Veillonella, Actinomyces, Haemophilus, etc.7. In actual fact, this method only reveals the bacterial effector molecules for cancer, but not the complex molecular pathway due to other microbial species belonging to the microbiota or those in the target-cells molecular signals. During the tissue neoplastic transformation process and already in the first step of tumorigenesis, microbiota as well as human target cells emit a great number of molecular signals involved in: (i) the process of turning opportunistic bacteria into pathogens, (ii) chronic inflammation, (iii) anti-apoptotic molecules, (iv) related cancerogenic substances, (v) actions for evasion of the immune system8.

Some of these signals could be present years before in the oral microbiota (e.g., in the tongue biofilm) and before the tumour is clinically significant. In the same way activated cancer bacteria, through transitory bacteraemia phenomena, could move from the oral microflora to systemic tissues activating a carcinogenesis process in another body site (Figure 1).

Interactomics represents a pragmatic construct that depends on omics-based sciences. It is certainly a de novo entity that has arisen of late within the context of postgenomic systems biology.

In oral biology, this approach starts from the initial concept of protein/protein interaction between bacteria and cells, now enlarged to small molecules including metabolites and small RNAs. These molecules are normally involved in microbe-microbe and microbe-human cells communication. Freire et al9, described a singular vision regarding oral interactome networks between health and disease. In particular, these authors discuss the acquisition of a complex (mature) microbiota and adaptive immunity, as though these cell to cell relationships have evolved as a means to maintain homeostasis and where the role of the microbiota is to modulate-educate the immune system (e.g. host cytokine control) 10. These authors basically view and suppose the interactome network to be an ecological chronometer of health and disease9. If this approach is shifted to the cancer-microbe interactome and taking into consideration the heterogeneous nature of cancer, the outstanding role of this complex biological network means that it has become a new significant aspect that can contribute to the advanced diagnosis and potential treatment of cancer, particularly as regards its solid forms. The interpretation of this complex signal mesh could extend the horizon of new personalized treatments against tumors, giving a new perspective in advanced medicine that integrates clinical knowledge, bioinformatics, and networks in systems biology.

As described above, a bacteria-mediated carcinogenesis process often begins a long time before its clinical evidence. One of the first signs is represented by signals of a permanent microbial flora dysbiosis that in healthy subjects could be due to a microbial biofilm resident in the tongue dorsum or in tooth plaque. The first sign of this microbial alteration is represented by evident halitosis, due to the production of volatile sulfur compounds by bacteria11, as well as some stress-related mRNAs in the oral tissues12. This suggests that the control of dysbiosis and biofilm in oral medicine represents the first step in cancer prevention. Furthermore, the oral pathologist can promptly identify the early signs of epithelial dysplasia in the oral cavity and, by using the new high-throughput laboratory technologies, can identify the interactomics markers for diagnosis and therapy, e.g. micro and circular RNAs or other small molecules. This is a crucial aspect for efficient personalized medicine in the future. In a very immediate future, with only less than 1 minute, dentists through a simple tongue brush will can have important information for prevention and treatment of misdiagnosed cancer.

One of the authors, CC performed his/her activity in the framework of the International PhD in Innovation Sciences and Technologies at the University of Cagliari, Italy.

The Authors declare that there is no conflict of interest. 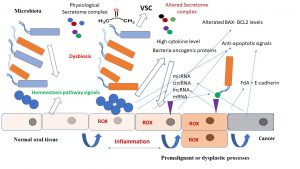 Figure 1. From dysbiosis to cancer, a schematic representation of the main interactomic signals involved in bacteria -mediated carcinogenesis in the oral cavity, for example, tongue tissue.
Free PDF Download